In a world of mega gyms, programs with multiple locations, hundreds of athletes, and a steady flow of incoming talent, how is a small (or any size!) gym supposed to compete? There are so many small senior and small senior coed teams that they have to compete in an entirely separate round – and few of these teams make it semi-finals and almost none make it to Finals.

Ushering in a New Era of Cheerleading

USASF did something interesting earlier this year. They announced two new level 5 divisions, Extra Small and Extra Small Coed. These teams can compete with 5-14 athletes and only two of those members can be males in the coed division.

After Worlds 2017, USASF made the new divisions eligible to compete at Worlds in 2018. And the most interesting part is that a team *can only* take an Extra Small or Extra Small Coed team to Worlds if they have no other Worlds teams.

That means mega gyms can’t compete in either new division, which in turn means that small, medium, and large-sized gyms are about to step into the spotlight in a HUGE way. A D2 Worlds has been a proposed option for several years, but there has always been a lot of concern about gyms purposely limiting their enrollment and preventing growth to stay in these categories. But in our opinion, this new stipulation and team size restriction was an absolutely perfect decision by the USASF.

Arguably, there are four different types of programs:

When you look at who has won a medal at the Cheerleading Worlds since the beginning, it’s dominated by a small handful of gyms – ten gyms have won 62% of the medals ever awarded. But now, USASF has made a conscious decision to give teams who have serious talent in smaller numbers a new way to compete.

While we can speculate all we want about how this is all going to turn out, we wanted to talk to someone paving the way in this new division. We caught up with James Foreman, the Allstar Director at Tribe Cheer and coach of Chiefs who will compete in Extra Small Coed this year.

Brilliant for The Industry

James believes the new divisions are “brilliant for the industry.” The numbers make sense and USASF made a competitive option for a lot of different programs out there. Last year, his level 5 team, Chiefs, competed in the Small Senior Coed 5 division and went to Worlds on an at-large bid. This means that they had to compete in the prelims round – which they won. In fact, James told us that by score, Chiefs beat out 107 teams. They outscored every single Small Senior, Small Coed, Medium Senior, and Medium Coed that competed in the prelims round.

But unfortunately, they didn’t make it to finals, which is a near-impossible task in the Small Senior divisions. Only ten teams make it per division, and there’s a lot of competition. You have super talented teams caught up in insanely deep divisions. Over the last two years, only two small senior teams have made it from prelims to finals and zero small coed teams have made it all the way through three days.

This season, Small Senior and Small Senior Coed divisions will thin out and give way for new talent to break through the noise. Critics of the new divisions will say that the Cheerleading Worlds is supposed to be difficult and for the best-of-the-best. But, USASF isn’t taking anything away from the teams who already thrive in difficult divisions. They are simply creating a new way for even more teams to get recognition.

Making Kids Believe They Can Win

A team’s motivation is one of the most important factors in a winning formula. James believes that the Extra Small divisions are going to promote an insane amount of motivation within smaller programs. For the first time in awhile, small gyms are going to believe that have a legitimate opportunity to win a World Championship title – or even make it to finals. That’s huge. And in a sport that’s extremely expensive and time-consuming, we should be doing everything we can to motivate athletes at the highest level to stay in the sport and fuel their passions.

Cheerleading has changed a lot in the past 10 years. In the days before social media, a team would show up to NCA or Worlds with their best routine, they competed, you watched other teams live, and they announced the winner. Then after, the team would rally together and talk about what they could fix next season and get fired up to try again next year. If they worked hard enough, they too could win.

In today’s hyper-connected world, the top teams’ skills, routines, and everyone and their mom’s thoughts are constantly shoved in your face. When the top three or four teams in each division dominate conversations, kids struggle to keep their heads held high. Due to a loss of motivation, We have watched kids cut ties from the program they grew up with. Or worse, they quit cheerleading altogether. Athletes (and their parents!) make a lot of sacrifices to cheer, and for some, it’s not worth it if they don’t believe they have a legitimate shot at a win.

The Extra Small divisions will relight a flame in so many athletes and programs across the country. Over the past five to seven years, we’ve watched amazing gyms close their doors because they couldn’t field a solid Worlds program. Kids felt forced to leave to find a team and gym owners had no option but to let them go.

When kids are fired up and motivated, there’s so much more that can be done. And right now, James sees the fire within his kids that he hasn’t seen in years.

As the All-Star director at Tribe Cheer, James plays a large part in their staff’s team placement decisions. After they decided to move from Small Senior Coed to Extra Small Coed, there was an unintended waterfall effect. They knew they were creating a stronger Worlds team, but that decision allowed them to strengthen their Senior Restricted 5 team, which then allowed them to strengthen their Senior level 4 and so on. Today, there are more kids in the appropriate level and age groups, and so far it’s working great.

Age and level appropriateness is a HUGE factor in success. “People underestimate the advantage that mega gyms like Cheer Athletics and Stingrays have when it comes to team placements,” James said. “With so many athletes, they’re able to provide not just every level, but every age group for every level as well while still fielding large financially smart teams for their business. This allows for a healthier, more enjoyable experience for every kid in their program. It positively affects their retention a lot.”

With the new restrictions, it will allow smaller gyms to not only stay alive but also fuel growth. The new divisions give small to medium sized gyms a real shot at a World Championship title. It’s much more realistic for a gym to field a team of 14 girls or 12 girls and two boys. A gym of 100 can field a 14 person team to compete with and be just as strong as a gym that has 300 athletes.

What James Expects Next Season

There are countless talented programs across the country who have been waiting for an opportunity like this to take the Worlds stage. Just take a look at how The Summit has affected how people see different gyms from around the country. Suddenly, a whole new group of programs is getting attention, and that’s exactly what we expect to happen with the Extra Small and Extra Small Coed division.

Who does he have his eye on? For Extra Small he’s expecting big things from Green Bay Elite, SCV, Star Athletics, Elite Cheer Nebraska, and LUXE. For Extra Small Coed, he’s watching Hawaii Hi-5, Five Star Athletics, Georgia Heat, and he “knows that there is going to be some team that comes out of nowhere that will be a true contender!”

A Sneak Peak of Tribe Chiefs

Tribe Chiefs opening stunt! Only 7 weeks until the showing, and we can’t wait for the World to see our routine! pic.twitter.com/3xZ1HgA6Y5

The new Extra Small and Extra Small Coed divisions are shakeups that we think the Cheerleading Worlds needs. It’s something new, fun. different and definitely a conversation starter. For the first time, we will by default see an entirely new set of talent take center stage.

“This is just such a great move for the industry. With Mega gyms buying out Small and Medium gyms left and right, the fate of the industry was truly becoming what so many predicted.” said James “One with only 10-15 Mega Gyms and all of their other locations. This new division is going to REVIVE so many programs and give them a shot to keep their brand and their traditions going for a lot longer. The cheerleading world NEEDED something like this!” 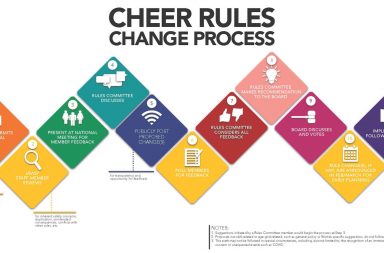 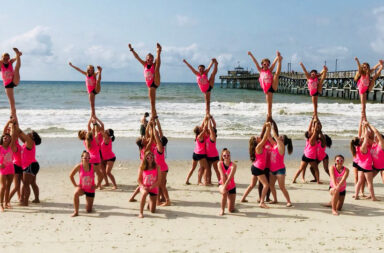 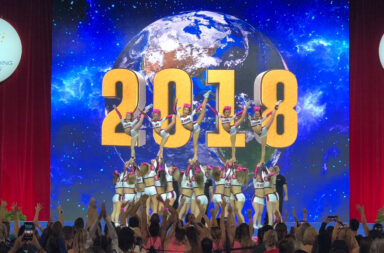